My new play has alot of props and sound cues. It takes place in a radio station so there’s the DJ booth props, props in the analog archives room, sounds of what’s playing on the radio: music, ads, interviews. I’m presenting act 1 in a one-acts festival during the third week of February in NYC.

If I’d been working on this play two years ago, or even last year, I would have hired designers: props designer, sound designer, someone to coordinate the origin music (I need a melodic cover of NWA’s Fuck the Police, among other things). But when we started working on it, Ali Ayala directing, I realized that I did not want another set of hands or another set of ideas in my world. The world of the play is a real place to me, I know what it looks like, what it sounds like, and I want complete freedom to control the atmosphere of that world. I wrote (am writing) the script. I chose the director, I cast the roles. I want to design the props, I want to design the sound.

It feels good to have the whole world come together the way I imagine it, to not have to explain to someone, who has their own ideas, what I want. Instead I just do what I want.

A few years ago I would have said “I can’t do all the props, I need to focus on the writing. Plus I bet legit props and sound designers are better at this stuff than me.”

But now I realize you don’t need a masters degree to design sound or props (or write or direct plays for that matter). I can be my own self-proclaimed expert in the world of my play.

I’ve started the binoculars (left), the reel-to-reel tapes (the wheels down front), the mic (center on the table), and the hard drive (far right on the table). 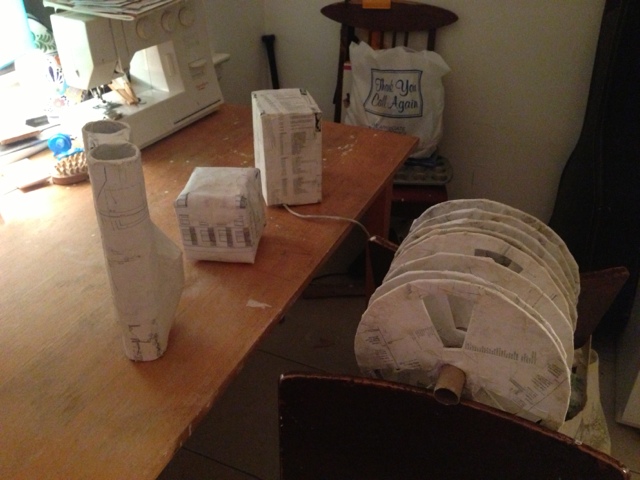 2 thoughts on “Design your show”