In February 1995, Dave and I moved in together. It was Ash Wednesday in fact, and both of us being Catholic (albeit substantially lapsed), it felt pretty immoral to start shacking up on the first day of Lent. Never fearing hypocrisy, Dave showed up to our morning move-in with ashes on his forehead. I’d been too ashamed slash too proud to go. Y’know how it is.

Remembering this apartment now all I can think is how brave my mother was. She actually dropped me off here with a bunch of my stuff. I was 19, what looked like a college drop-out, moving in with a dangerous looking boy, into a nearly dilapidated wood structured three floor apartment building situated next to an obvious brothel in a sketchy neighborhood of slowly gentrifying Philadelphia.

The apartment was on the second floor. The rickety staircase was carpeted with a dulled, dirty tan pile more suited for subdivision living rooms than inner city common areas. The carpet extended into our apartment, and went through every room. This included the kitchen, which was also a hallway from the living room to the bedroom, which all had to be walked through to get to the bathroom.

I worked several jobs in 1995, none of them ended quite well. The first was making sandwiches at an Au Bon Pain. I was the only prep school type who worked there, and this was a source of endless humour for my co-workers, until Wylene got pregnant with the manager’s baby and Deb lost her washer/dryer for being late with just one payment. Cliff tried to sell me crack.

Film Festival intern, Arden Theater Co summer intern, record shop, hat shop. We hung at The Last Drop. Then my year’s leave of absence, which I’d formally registered with the dean’s office, was over and I went back to school. I wrote two plays that year and brought them back to Sarah Lawrence with me, where they were both produced by the department. Shirley Kaplan said I was a ‘real authentic,’ and I was just authentic enough to find that insulting.

My memory is awash with images of that year. Here are a few:

Sitting on the curb outside the apartment, tripping on LSD, wearing a long peasant skirt with tiers of patterned color. I couldn’t stop smiling, but it was just my face, the world was reeling, the sky, and a friend reached down a hand to help me up. He said “you look like you’re having a wonderful time. I wish I was having as good a time as you.” And I laughed because I was miserable inside, I wanted to be myself again, and the irony that I was not capable of communicating that to him and he would always misunderstand was funny to me.

Watching the school children play across the street from my bedroom window. Them watching me back from their second story classroom when I would wake up late.

Sitting on our fire escape smoking cigarettes with Dave and a friend when a limo pulled up across the street and our neighbors, two black women who we’d assumed were lesbians but it turned out were actually prostitutes, got out and started yelling up at us. “Keep your people cool!” They shouted. “Keep your people cool!” We didn’t know what they were talking about, but they were talking to us, so we scurried inside.

Dave helped the old woman who lived on the third floor carry her groceries in one day. He said he stopped and chatted with her for a while, said her apartment walls were plastered with photographs and clippings of her life. This is still a meaningful memory for him

The joy and anticipation of going back to school, knowing this wouldn’t be my life forever.

For how short it turns out to be, life is vast and deep. 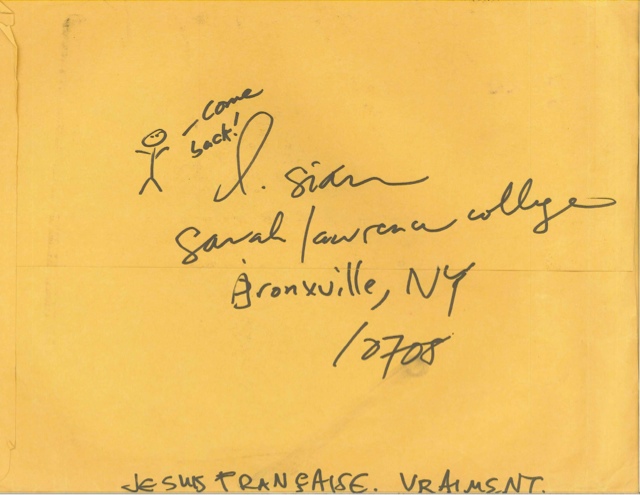