By the time we lived in North Andover we were a family. We’d decided, and that was that. My step-mother often made a point of saying that she was my real mom, and we all made a point of pretending my mom didn’t exist. Except me, but that was my secret. I got good at keeping secrets; until now, basically. My step-mom was only 21 years old. She’d married a man ten years her senior, and his five year old daughter. My dad and I were a package deal, I never had any doubt of that.

I think there’s this illusion kids have about their parents and caregivers, and I think it’s one they need to have. We believe that our parents and caregivers have their shit together, and that when they appear to not have their shit together, that is the aberration. I’m realizing now that nothing is smooth. The times when everything is going well at once: when you’re happy with your work, when your husband gives you butterflies just by walking through the door, when all your bills are paid, the bed is made, your kid’s nose isn’t running, you’ve got a vacation planned, you’re wearing your favorite jeans, you had a great night out with friends, and your mom just said she was proud of you; those are the rarer times. You can’t trust tomorrow, but if you don’t plan for it, it will suck. You have to count on something that isn’t real, and will it to be real, and then make it happen. I this is what’s known as faith.

I thought my step-mom had her shit together. I thought she was so together that she made me and my dad be glue too. It felt like the next stop was everything I ever dreamed of. She loved me for real, and she didn’t have to. She chose my dad, but she chose me, too, and she always made sure I knew it. She wanted me, and this meant everything.

She and my dad were planning for our future. They did what you’re supposed to do: they bought a place. If I had this place now but where I live instead of the north shore I would be thrilled. Two bedrooms, eat in kitchen, large living room with a balcony. It was small, but so was our family, so it worked out, and I’m into simplicity.

We’d been living in Lawrence, my dad and I, in a duplex. Janet moved in at a certain point, much to the dismay of her Irish American parents, who thought me and my dad were pretty much bad news from day one. I think they grew to like us, and I got pretty close to Janet’s mom, who was always a real dear to me. Her dad would always have a chocolate bar in his pocket for me.

The timing is hazy for me, but I came back from a visit to my mom’s in NYC and we didn’t live in Lawrence anymore. We lived in this condo in N Andover. I’m sure the schools were better, and I can see how that would have been a big reason for the move. My dad and Janet picked me up from the airport and said they had a surprise for me. I was super excited! We got to the condo, and because I was 6, I just didn’t get it. We’d already lived in an apartment, what was the difference? Looking at it from a grown-up perspective, I can see how different it was. They were newlyweds. They’d moved from an apartment to their own home. They were starting their lives together. It was fresh, it was theirs, and it could be mine too. But kids are self-centered; kids have to be self-centered. Being a kid is really hard, and to grow up into a non-completely-freaked-out adult, you need to be able to take some things for granted, like your own personal safety, knowing that tomorrow there will be food, shelter, that the people who take care of you will keep taking care of you. A new home didn’t mean that much to me, but the canopy bed, with which my new room was furnished, meant a great deal.

It was a blue canopy bed, with white and gold posts. I had filmy rainbow curtains, and a Holly Hobby watch, which I still have for some reason. This is where I learned to tell time, and where Janet taught me to tie my own shoes. This is where I said “shit” for the first time, when I stubbed my toe on some hard wood furniture. I was so scared while Janet and my dad tried not to laugh. This is where I got strep throat, and refused to take my antibiotic pills. I sat in the kitchen chair and couldn’t swallow them. My father got so frustrated, and scared, what with my 104 degree fever, that he said “if you don’t take those pills I’m going to shove them down your throat.” I thought, I didn’t know that was an option! I took a pill between my thumb and forefinger, reached all the way to the back of my mouth, and dropped it down my throat. This is still how I swallow pills.

I went to an elementary school in North Andover, and my best friend was Katrina. Her parents were divorced, too, and she also lived with her dad, and her older brother. Once we were on the half-moon style jungle gym at recess, and Katrina looked stricken.

Katrina
Don’t get down.

We both looked over to the entrance of the school, and a woman stood there, with the secretary from the Principal’s office, and waved, and smiled.

Katrina
Whatever you do, don’t get down.

We stayed up there. We wouldn’t get down. The next thing I remember is Janet and I sitting on the step outside the gym. I recall this being the moment when Janet told me about sex, but she said later that’s not what happened. What definitely happened is that my dad and Janet said I wasn’t allowed to be friends with Katrina anymore. This was so unfair to me. Katrina and I talked about it while playing Kate and Ally in the little grove of trees at recess. I’d never seen the show, and Katrina always made me be Kate. We agreed that it wasn’t right for people to decide who your friends could be, and that we could still be friends at school and my parents wouldn’t know. It strikes me now that Katrina’s favorite show was about two moms with no dads.

We weren’t friends anymore after that.

My new best friend was Sarah. And when I say new best friend I mean my only school friend. Sarah and I painted on my bedroom wall with water colors. We had tea parties with real water from my little blue tea set. We climbed under the covers and took off all our clothes. Sarah and I weren’t allowed to be friends anymore after that.

In the summer I would play with the neighborhood kids. I always remember going to bed before the other kids and hearing their voices filter up to my window. I cried and cried, feeling left out, but I was the youngest (next to Vicki’s brother, but she was the oldest). Vicki’s mom was our troop leader, and for one of our projects we wrote letters for Amnesty International to free political prisoners. In fall we raked up all the leaves into big piles and jumped in them. In spring we made mud pies. When a McDonalds opened up at the end of our street, the parents were pissed, but all us kids were happy about it.

One girl, whose parents were also divorced, and who also lived with her dad, had a Gogo’s record and we’d listen to it in her room and dance around. When I asked for a Gogo’s record of my own my dad said “no way.” Thus began a disagreement about pop music that lasted through the Beastie Boys and My Life with the Thrill Kill Cult and ended with Losing My Religion, Steely Dan, and finally when my dad introduced me to Amy Winehouse.

I had a babysitter when Janet went back to work, earning downpayment money for the childhood home. The babysitter was a high school girl, and her friend’s family lived in our building. We watched Luke and Laura’s wedding on General Hospital at her friend’s house then went for a joy ride with their boy friends. I don’t know if they were boys who were friends or boyfriends, but she got fired for taking me on the joy ride.

If it were my kid I’d have had them arrested for kidnapping. 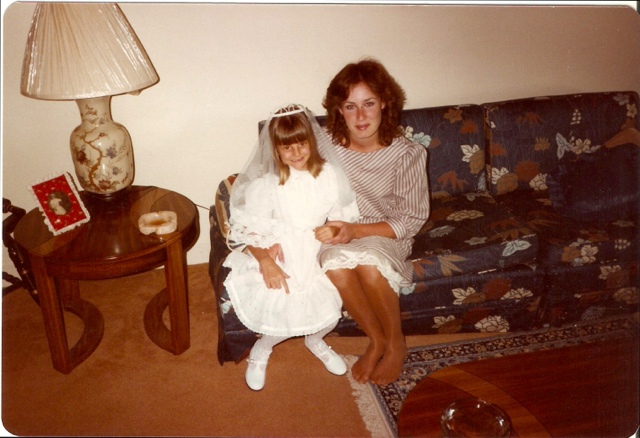 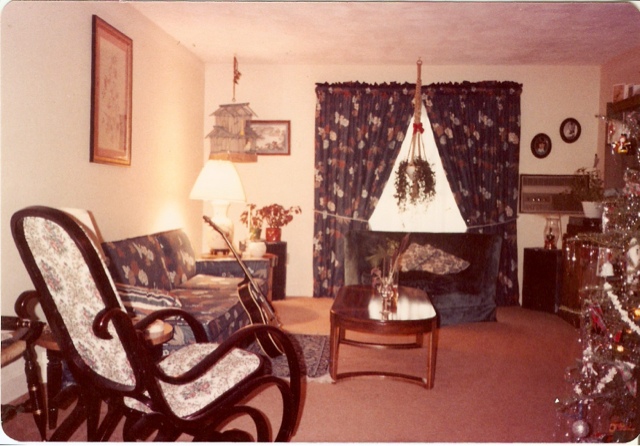 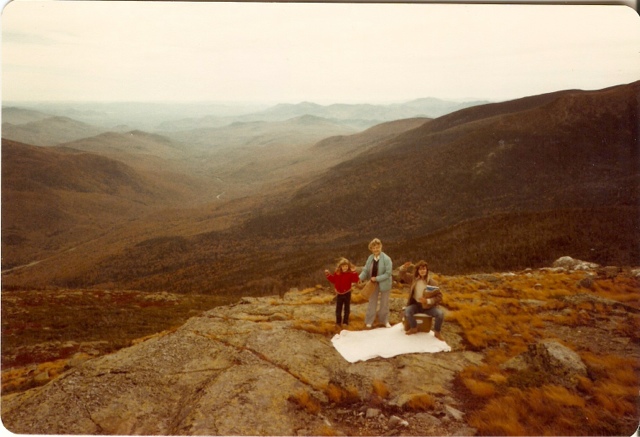 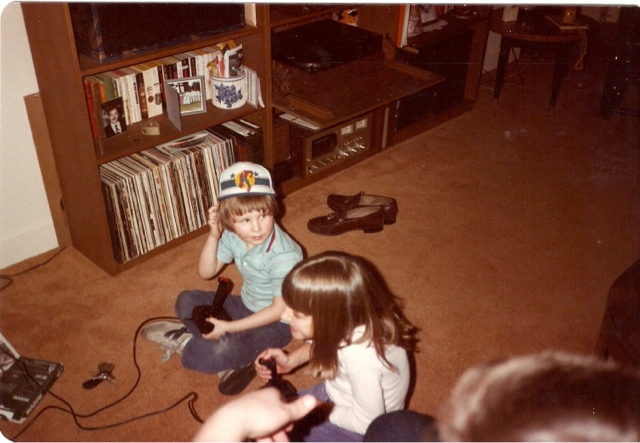 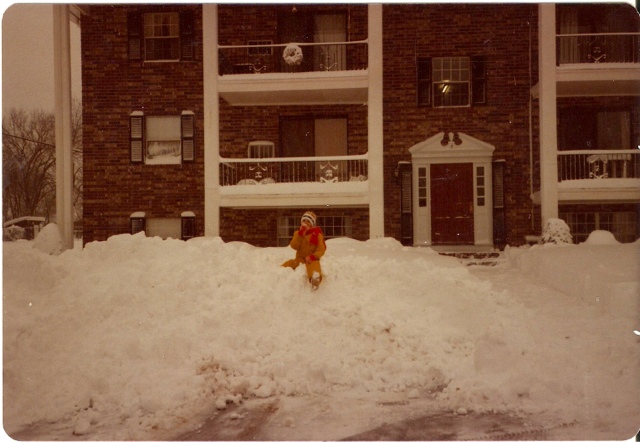 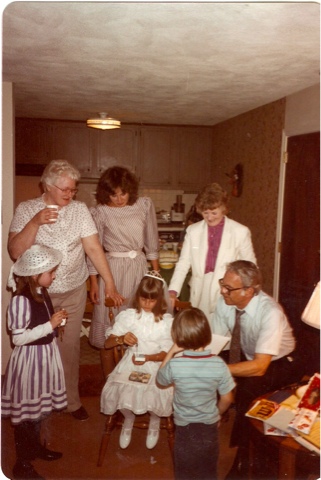