I remember the day I decided life was great. I was unemployed, which was great, I was doing freelance theater tech, which was extremely aggravating, and also pretty great. I’d been working on a show at The Flea. It was 2003. I’d been living in New York for less than a year. I was walking up Broadway from Tribeca. The winter sun was bright and shone warmly down at my face. I realize with a shock: I am happy.

Happy was new. Happy was unexpected. Happy was in spite of everything that could make me unhappy. I realize suddenly that I feel attractive. I’d never really felt attractive before. I felt good in my body. One day perusing records in a Princeton record shop with my mom I realize that I am not self-conscious anymore. It is like a thunder clap of recognition. I whisper to my mom “mom, I don’t feel self-conscious anymore.” And she says “oh honey, isn’t it great?” And we giggle. And we buy records.

I’d never taken time to grieve for my friend Val who died at 21 in 2000, I’d been too concerned with what Dave needed, with that which was making him very personally miserable. So I tell him “listen, I’m going to fall apart. You’re going to have to hold things together.” I don’t believe that he can do it, but he does it, he doesn’t do it the way I would have done it, but it doesn’t matter, because it is done. I let go of everything I was holding on to. I stop trying to get through the night and instead try to get through the day, then without worrying too hard about it, I start thinking about next week, and then next month, next year, and the year after. I think about what I want my life to be like. Things don’t always go how I would like, we’re short of money, we argue all the time, but it doesn’t really matter. I don’t hold it in my heart. It doesn’t make it hard to breath, not all the time.

We have really lovely friends. We go on trips, like our annual Fourth of July four-day weekend parties at a friend’s family’s lake house. We have ridiculously good times and make complete asses of ourselves and it is wonderful. We drink excessively and stay up late looking at the moon, or playing cards, or setting up the chairs as though the back porch is a stage and performing for each other. Guitars are brought out on the regular, monologues are remembered. We all cook for each other and sleep in and clean up together. I make french toast, and veggie pastas, and introduce a bunch of midwesterners to steamed clams. There are fire works. There’s a game called Chair, that is a very bad, dangerous game, where you sit in a plastic lawn chair and try to flip over backwards. It is delightful. We swim in the lake, we burn in the sun, and kayak out to see the fireworks. Someone sets the lawn on fire. There’s no connectivity, so we connect with each other. We don’t share a bunch of deep secrets or profundities, we just actually relax. I learn to relax.

I have friends in theater, and they are fucking talented and smart. Matt Korahais is our friend, and we’d known him a few years back in Philly, but run into him again in New York. Dave and Matt and I start doing Sticky together. It’s a fucking blast. We don’t wait for permission, we just do stuff. We stand on tables at bars and tell stories to people who want to hear them. We meet people, and read new plays, and write them. We march against the war, we take 2nd Avenue with Transit and shut down the 59th Street Bridge. Dave starts acting at The Flea and I get to see him in new plays, get to see him coming out of himself, starting to be himself, after a long depression that started with his mom’s illness. I start to think: we are gonna have fun again.

We do. We have fun again. We go out. Our Lower East Side apartment is our home base. The place is small, it has bugs, it is over-priced, but that is all irrelevant. When we move in we buy a king sized, white, bed sheet to be the curtain for the big, triple window in the bedroom. The first thing we do, after signing the lease but before we even move in, is sit on the bedroom floor, each of us with a needle and thread, and stitch the top of this bed sheet. We thread the curtain wire through it and have sex on the floor. We always mean to get a different curtain, but it stays there the whole time we do. For both of us, we live here longer than we’ve ever lived anywhere: 7 years. The building has a roof deck from which you can see the entire city. When the blackout comes in 2003 the whole building brings drinks to the roof and watches the city turn dark.

We go to RAT conference in Argentina with Gabby Schaffer and Nick Fracarro and Matt and a bunch of other people. It’s a fucking great trip. We go to a theater conference, we perform our piece of the MacBeth Project in Rosario and stay at The Savoy. We never want to leave The Savoy. We want to write novels there and live out our days in a Malcolm Lowry-esque haze. We are ridiculed by other Americans for being too American. We like it. We decide America is ours. We decide we fucking love America and it belongs to us as much as anyone else. I lose my voice and end up with a fever at a commune called Villa Aldea. The communers offer me some horse penicillin. Dave instead calls a cab to take us to Buenos Aires before the rain closes off the dirt road. We approach the metropolis in the pouring rain and after a week in the pampas it is glorious. He gets me to an ER where they take some x-rays and get me some proper antibiotics. We spend a few days in a suite where I eat ravioli con jamon y queso and watch Seinfeld with Spanish subtitles, while recuperating.

We are in Buenos Aires for two weeks, the first with Matt, when he emerges a few days later from the pampas, the second just Dave and I. We meet a guy named Manuel. We tell him Matt is our attorney, because we’re all really into Hunter S. Thomson. When Matt goes home, Manuel says “you must feel much more relaxed now that your attorney is gone.” Dave and I spend Christmas together in Buenos Aires, and it is one of the best times of our lives. We hit the deck when the gunfire starts on Christmas Eve. We looks out at the city from the balcony. It feels great to be far away from everything and to still feel solid and meaningful. We try to get to Uruguay but we keep getting to the boat dock too late. We wander Buenos Aires, and go to clubs with Manuel. I like being out of the country. My mom misses us and picks us up at the airport.

Our friend Pete starts dating a girl named Ali and we meet her at Rachel’s birthday party at Larry Lawrence. Pete says “Ali does theater, you should talk.” I find this incredibly annoying, but we chat, we hit it off. I’m pretty sure she hates me. I always like that in a person. When Matt moves on to other projects, Ali jumps in and starts producing Sticky with us. She and I become great friends.

I meet Eduardo Machado and he opens the big wide door to grad school. I study with him and Kelly Stuart for three years. I really love school, and feel glad that I get to focus so much time on writing, and learning things. I meet some excellent people at Columbia, and am glad to know them. I feel smart, and good about things. My marriage is a mess, but I realize that I don’t have to perceive it that way anymore. Dave and I are different people, we are capable of making different choices, his choices don’t have to define me; mine don’t have to define him. When I make this realization, that he is not me and I am not him, we are able to come together as two individuals, as opposed to two people who see everything lacking in themselves reflected back in the form of another human being. I realize that he has a bunch of things that he has to work out for himself, but that they are not my things. It feels good to let those things go, and I think Dave is grateful to have them back. He gets to own his misery and sort it out for himself. We get to know each other again. Neither of us is who the other thought we were. We’d both changed, and we had alot to catch up on.

I get frustrated. I don’t know what I want from my career. I try out wanting different things, but none of it’s quite the right fit. I try to just do my work and trust that it will be what it will be, it will be received the way it will be received. I struggle with choices, with choosing the thing I want later over the thing I want right now, even when I want the thing right now really, really bad. I don’t quite feel like I’m carrying such a big weight around. As my mom would say, I take some rocks out of my knapsack.

I finish school having earned an M.F.A. It feels like a real accomplishment, like something I did on my own, on my own terms, and in my own way.

New York is my home. The world of ideas is my playground. 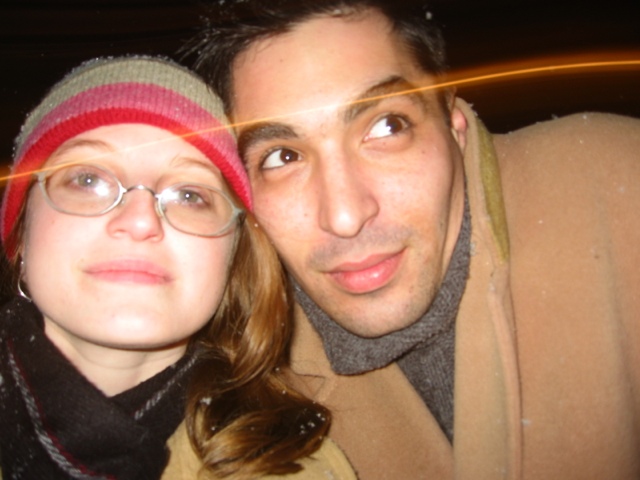 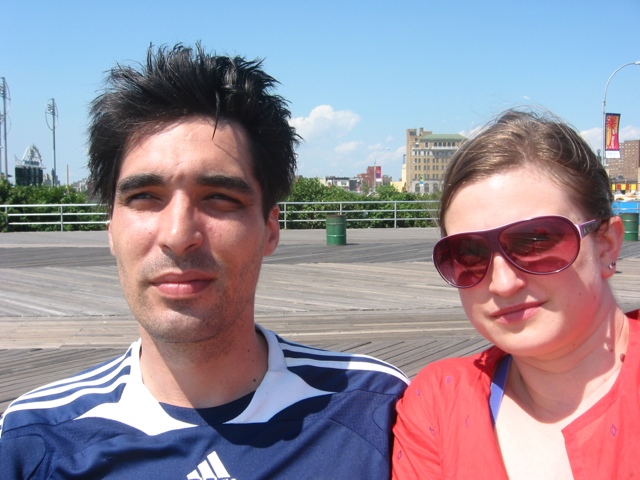 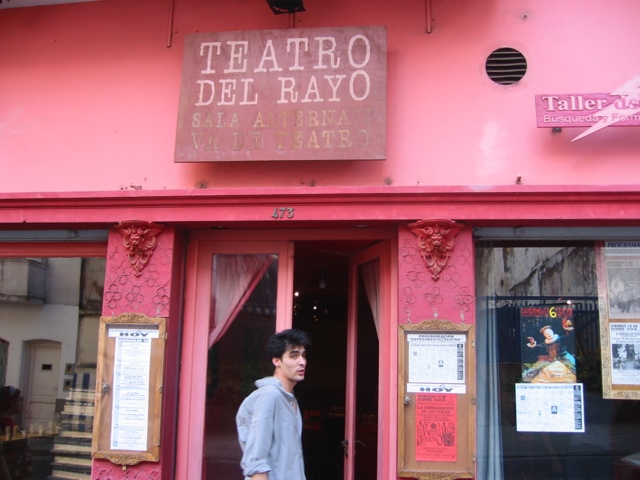