NY Madness is tonight, and I’m super glad to be involved.

The deal is that the writers are given a theme, have a few days to write a seven minute play on that theme, then a few more days to hash it out with a director and actors before its presented.

The theme was “light at the end of the tunnel.” At first it’s got a greeting card feel to it, but the more I thought about it, the more I realized that it’s about the perseverance of the human spirit. In this specific case, the theme is further influenced by Occupy Sandy, a grass roots relief group that sprung into action pretty much immediately after Sandy, and long before the flood waters subsided. I was pretty enamored of this group when they jumped into the fray back in post-Sandyness, and am further impressed that they’re still providing relief, morphing to meet the needs of the folks still working to rebuild.

It was an interesting writing process. First, it was fast, which isn’t such a big deal, but second, I didn’t know who was available to perform, and I didn’t want to spend a whole lot of time casting the play, instead I wanted to write for actors who were available. I signed on Zoe Metcalfe-Klaw as my director, and we talked actors. We decided the play should be two actors, one man and one woman. Zoe cast her friend Nessa Norich, and I reached out to Brandon Jones, who I’d seen in Barrie Gelles Script Tease. But the third part of what was interesting was that I decided to write about something that I’ve been struggling with, which is enabling v. helping. If you’re giving alot of yourself in an attempt to help someone, how do you know that you’re helping that person launch and independent life or if you’re just making it easier for them to lean real hard right on you?

Our last rehearsal was yesterday, and I think it’s a really fun piece. Without giving too much away, I can tell you that the play is called In Bloom, and it’s about a pair of exes who are tossed together by Sandy’s tidal wrath. Brandon and Nessa are super funny, and Zoe, who I’ve known for an unseemly number of years, really takes to the director’s chair.

If you’re in NYC, I hope you can make it to the show!

Here’s a picture of Zoe directing, and actors listening. 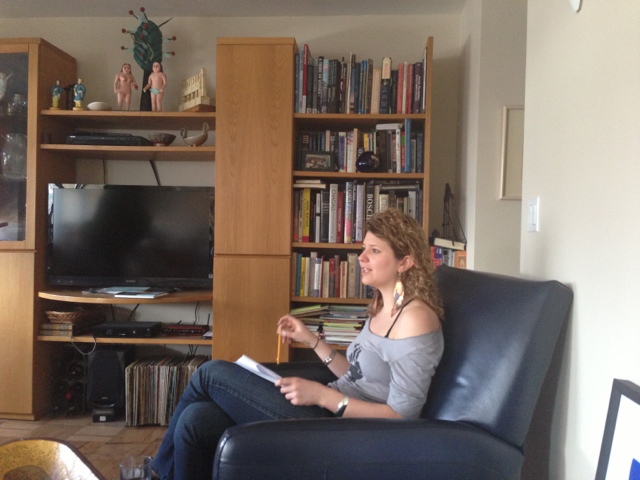 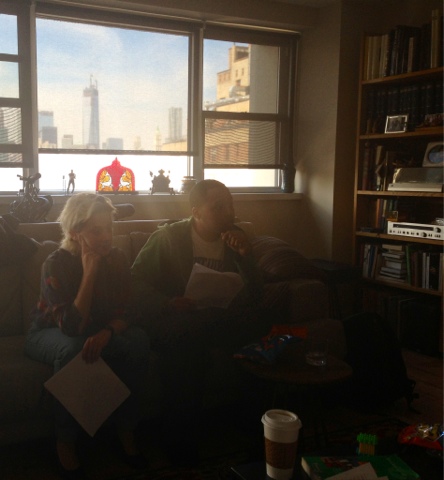 2 thoughts on “NY Madness: in which I have a play”